Net began as planned on 145.29 repeater. The exercise plan was reviewed before starting the simplex components. There were 9 checked in stations, one station was out-of-area. All stations were recorded in NetLogger and several stations monitored the exercise using NetLogger. 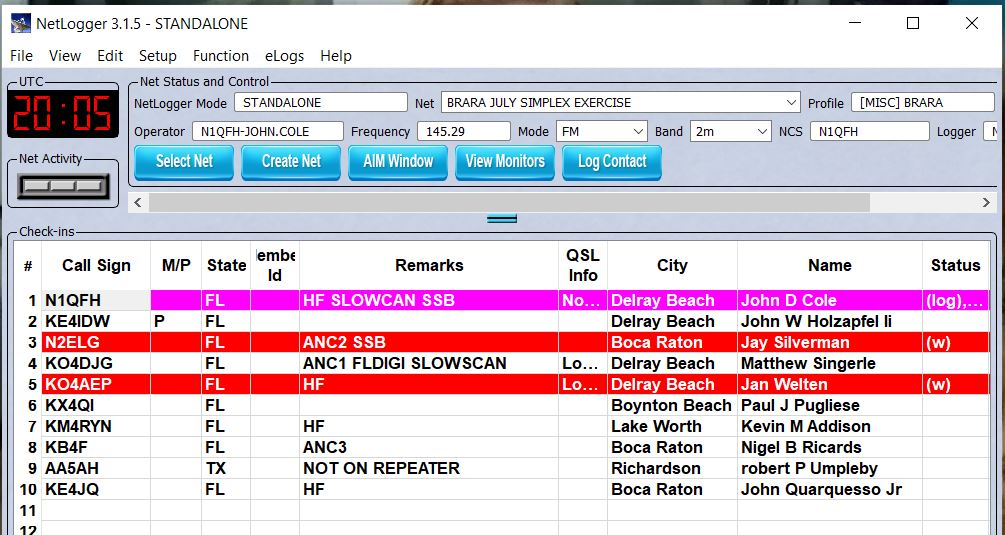 There were four HF capable stations in the exercise. The HF signal reports had mixed results. Some stations were weak-readable and others stations were not heard. It must be noted for the HF exercise portion, all stations had antennas with various orientation and power emissions. Those stations with directional beams had the best results and stations whose antenna were in parallel with others stations in the same east-west orientation were less likely to hear each other. This means when using HF we would need to rely on message relays.

The following feedback was provided

The official exercise concluded at 11.50am. Following the exercise, three stations tested other HF frequencies with mixed results. N1QFH could hear all stations but was not readable by any. This may have been due to antenna orientation of east west and in parallels to KO4AEP and close proximity to that station and N1QFH was using a terminated folded dipole. KO4AEP was heard by both N1QFH and KE4JQ and used a wire fed at about 35 feet in east west orientation. KE4JQ and KO4AEP had the best station to station contact on 12.220 and 28.410. All HF stations tried a signal report on 60m Channel-1 (5330.5 mhz) with no contact made by any station.

Please note – the HF frequencies are planned as long as they are not being used. NCS will assign stations to check the frequency use before making any official call to use those frequencies.

Before the net is established, stations are encouraged to:

1. Fully test radios
2. Setup the 2 simplex frequencies on their radios
3. Become familiar with programming their radios
4. Know how to use reverse when on the repeater
5. Know how to turn on and off squelch
6. Have set up best power and antennas options
7. Have identified a location for optimal performance
8. Station be ready to relay other stations

The Simplex Exercise will be established on 145.29 mHz  and stations will check in.

Once NCS has checked in all stations, the following will occur:

Stations may desire to remain on the repeater after the net closes to troubleshoot any problem that arise.

Results and summary will be reported on BRARA Scheduled Nets.

Because these exercises test our abilities and capabilities on simplex frequencies, we need to rely on clear communications. Using prowords and signal reports helps remove any use of coded communications such as 10-4 or “copy that”. Please note the use of the proword and when they are used by examples.

For these exercises, stations should become familiar with use of this list of pro-words.

THIS IS AA11BB SAY AGAIN CALLSIGN OVER

THIS IS BB11AA FOR NET CONTROL ADDITIONAL STATIONS OVER

“THIS IS” may be omitted by stations for brevity.

WHEN CHECKING IN, SAY YOUR CALLSIGN SLOWLY EG: “AA1BB OVER”

WHEN CHECKING IN, NO NEED TO SAY “THIS IS”

WHEN CHECKING IN, PLEASE PAUSE BEFORE TRANSMITTING

Capabilities for this exercise follows:

Capabilities to test for next exercise follows:

What we choose to exercise will be by consensus and as suggested by participants.