Adventure is a more appropriate way to describe the DX trip BRARA member Jay Garlitz was just on. The Medical Amateur Radio Council holds its annual business meeting at Xenia on even years but on odd years the location is the choice of the President. Holding that office and being odd I crafted a four day business meeting in Tampa this year followed by an eight day cruise out of their port. Four ports of call were made by the Carnival Miracle and it was a miracle MARCO was able to get through the logistics needed to operate DX on land in three ports. 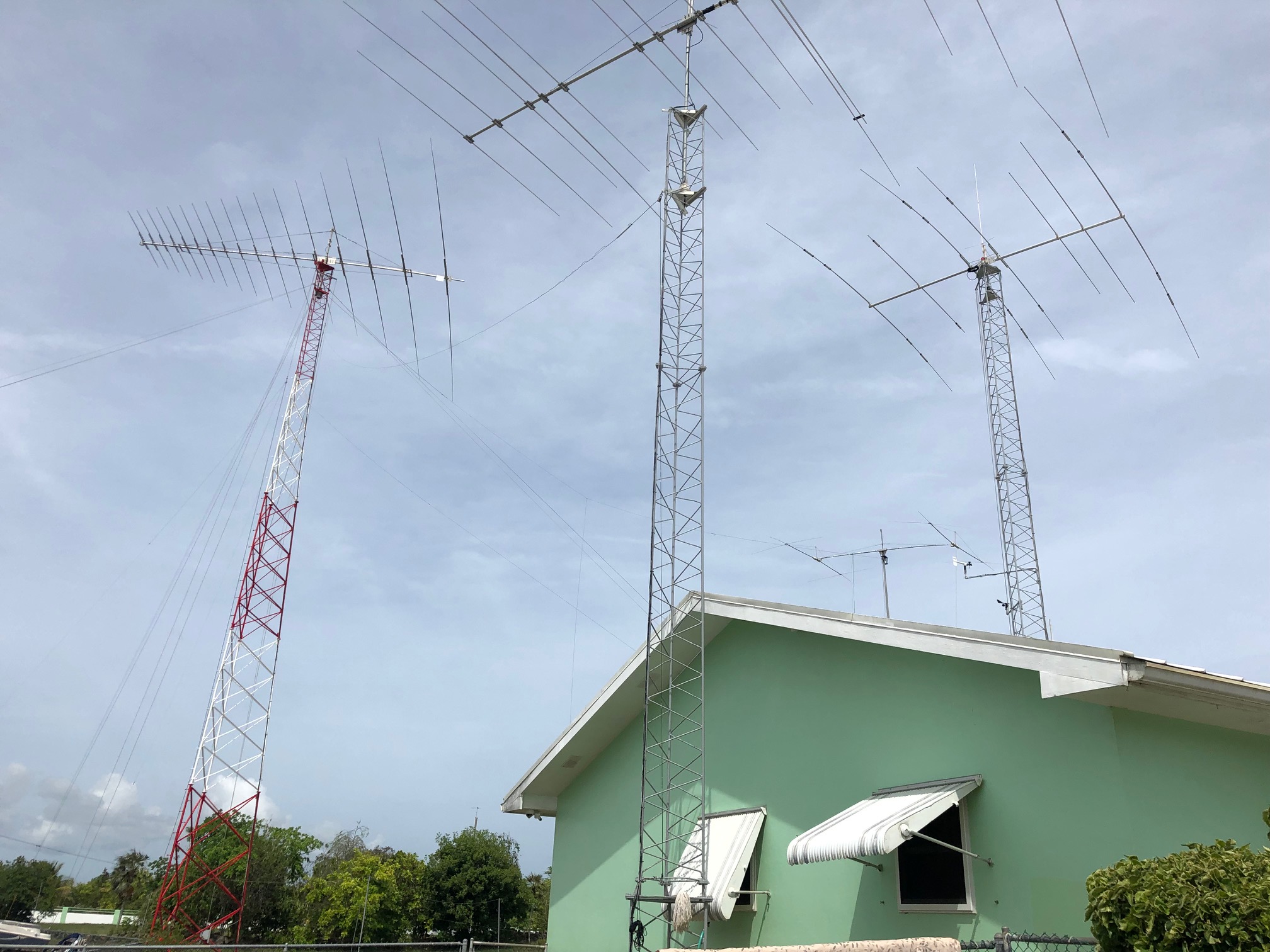 Twelve cruise cabins held fifteen hams and nine spouses who embarked with all the documentation needed to hold special operating events in Belize as V31D, at Roatan Isle of Bahia in Honduras as HQ9D, and on Grand Cayman as ZF2D. All we needed was kismet that local plans, the weather, customs, cruise ship tenders, propagation, security, getting back on ship in time for departure, and Murphy would all cooperate. With the cruise ship only being in port 7-9 hours in each location; but when debarkation/embarkation, tender time, transport to operating location, and station set-up/breakdown was factored in; that meant only 3-5 hours of radio operation at each special event location! 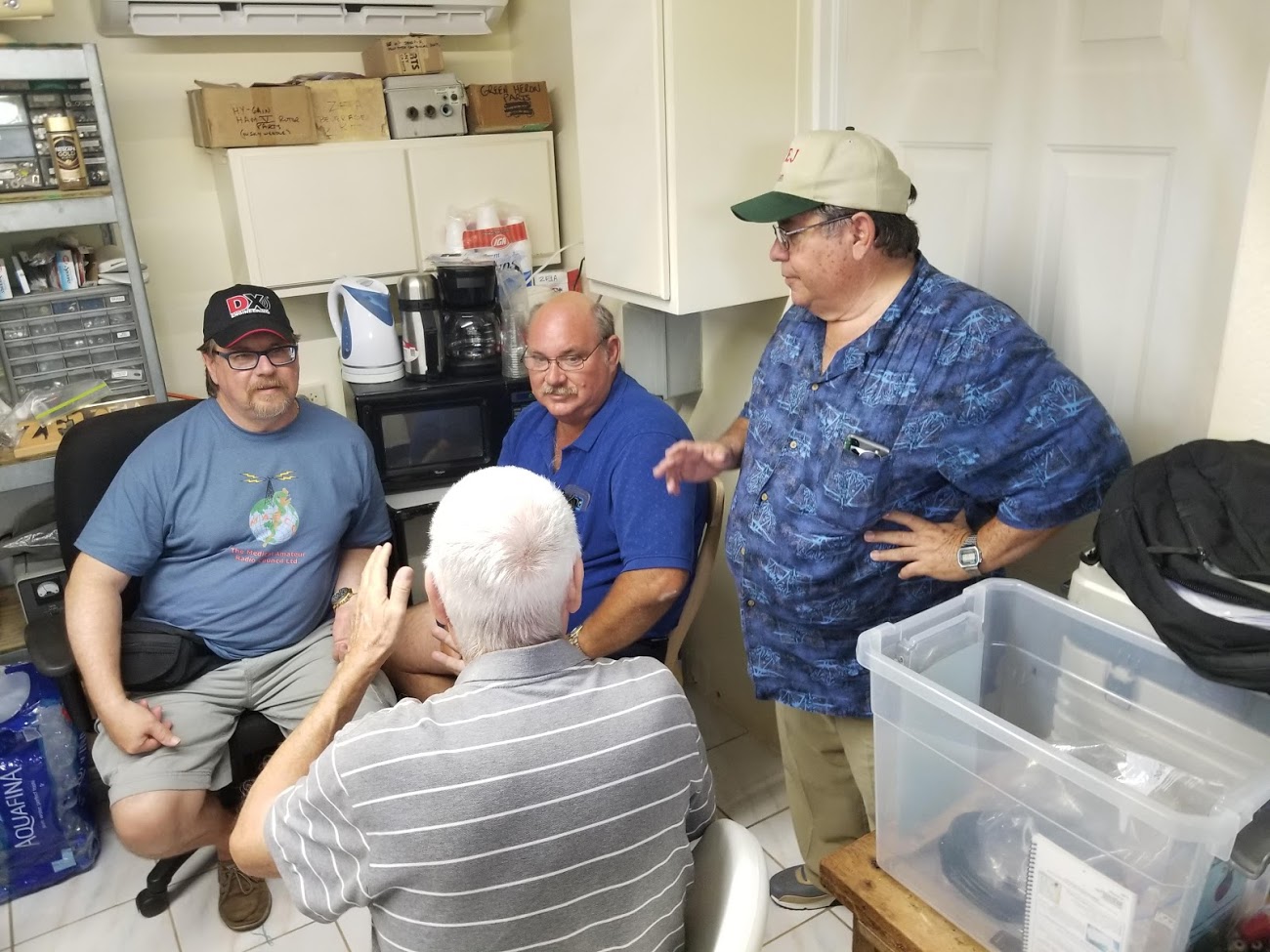 No on-ship operation was pursued other than 2m HT use. So why tackle this less than ideal operating task? The bonding experience for a group of medical hams was invaluable and the publicity generated could be a boon to membership growth. We were crazy enough to try and succeed but we did bring our own Psychiatrist along just in case! Each DX location has a different set of operators as members also enjoyed the holiday operation but there were enough time slots for all that desired them. Planned times of operation were off 1-2 hours in UTC as the published cruise literature did not state that Tampa time was being used for arrival and departure in each port rather than going by local time.. NFDXA members were on standby and many worked us, with some of the best signals heard! 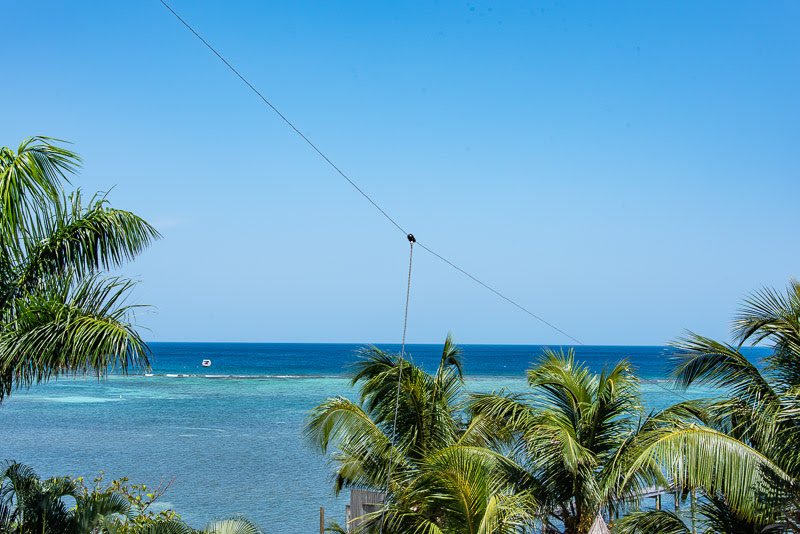 V31D was activated at a rental unit about 8 miles north of port up the coast, just off the water. The station was set-up on the rooftop under cover of a three story building with dipoles gently sloping down to trees on the property. HF1 was an ICOM IC-706/markIIg for 20m phone and CW operation. Station two was an ICOM IC-7000 primarily used for FT8 on 17m. Our co-hosts were a former mayor of Belize City and a former jet pilot in thee Belize forces, and they were of great help in planning. Ropes were pre-positioned in the trees for antenna support and help on the ground as present for getting the antennas hung in place. We quickly got on the air in an early to mid morning start, for almost five hours of operation. Propagation on 20m was poor and noise levels high until it was closing time when conditions were improving. FT8 on 17m was active with signals decoding throughout. After getting the operators familiar with the equipment at this first port of call we made 114 QSO’s with hams in 19 countries. 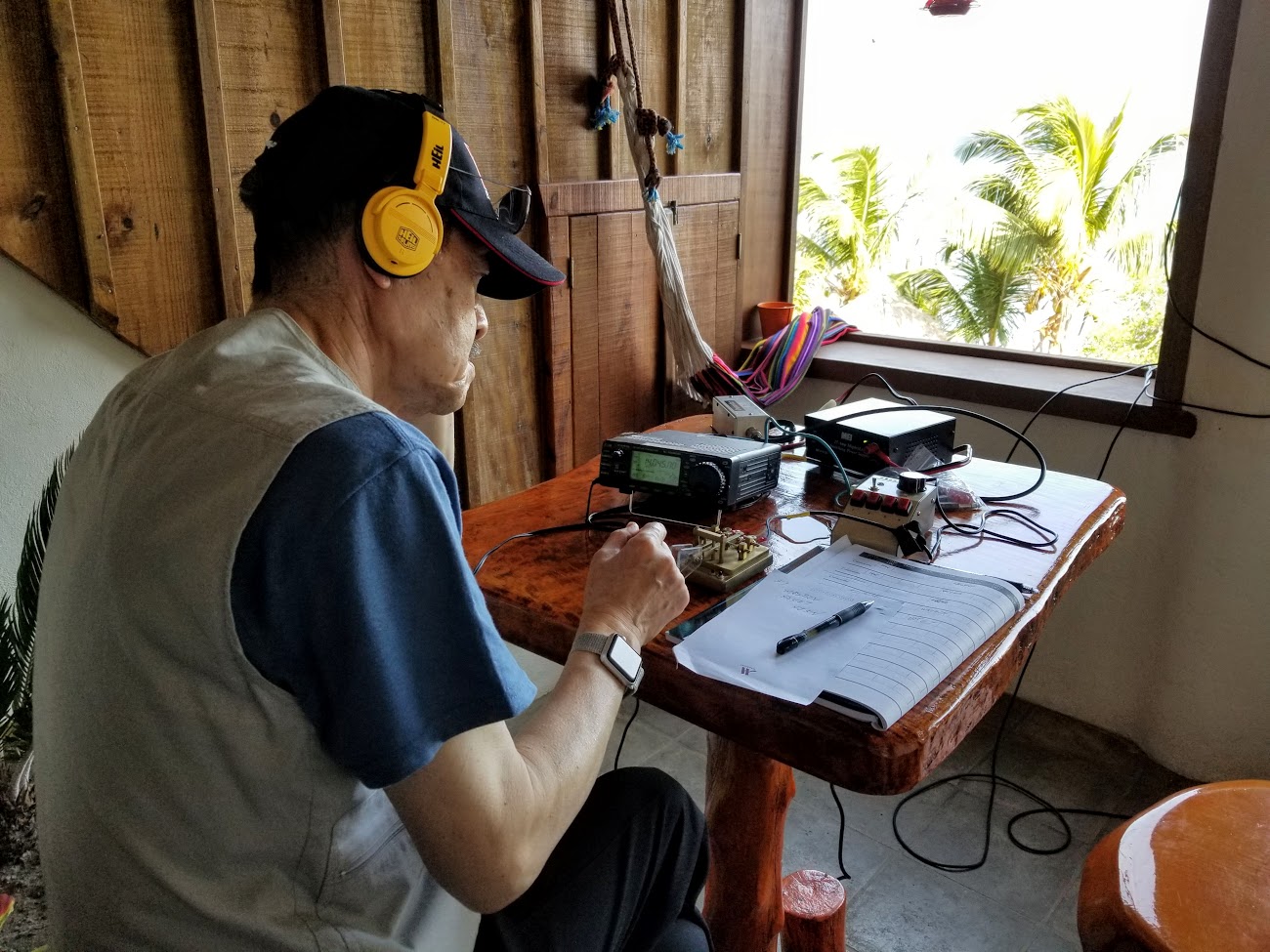 HQ9D was a short operation. The QTH was a diving and eco lodge 35 minutes from port, necessitated as the port is on the south side of Roatan at the base of a mountain. The NW coast location on the water we chose afforded great take-offs for NA, SA and Europe. The equipment used was the same as on V31D but operating time was less than three hours. The shack was set-up on the balcony of a second floor cabana facing the water. Lodge staff assisted with the antenna placement. The top floor of the building had a yoga studio perfect for hanging the antennas from, in Zen. Propagation was better and afforded us 122 contacts in 6 countries. 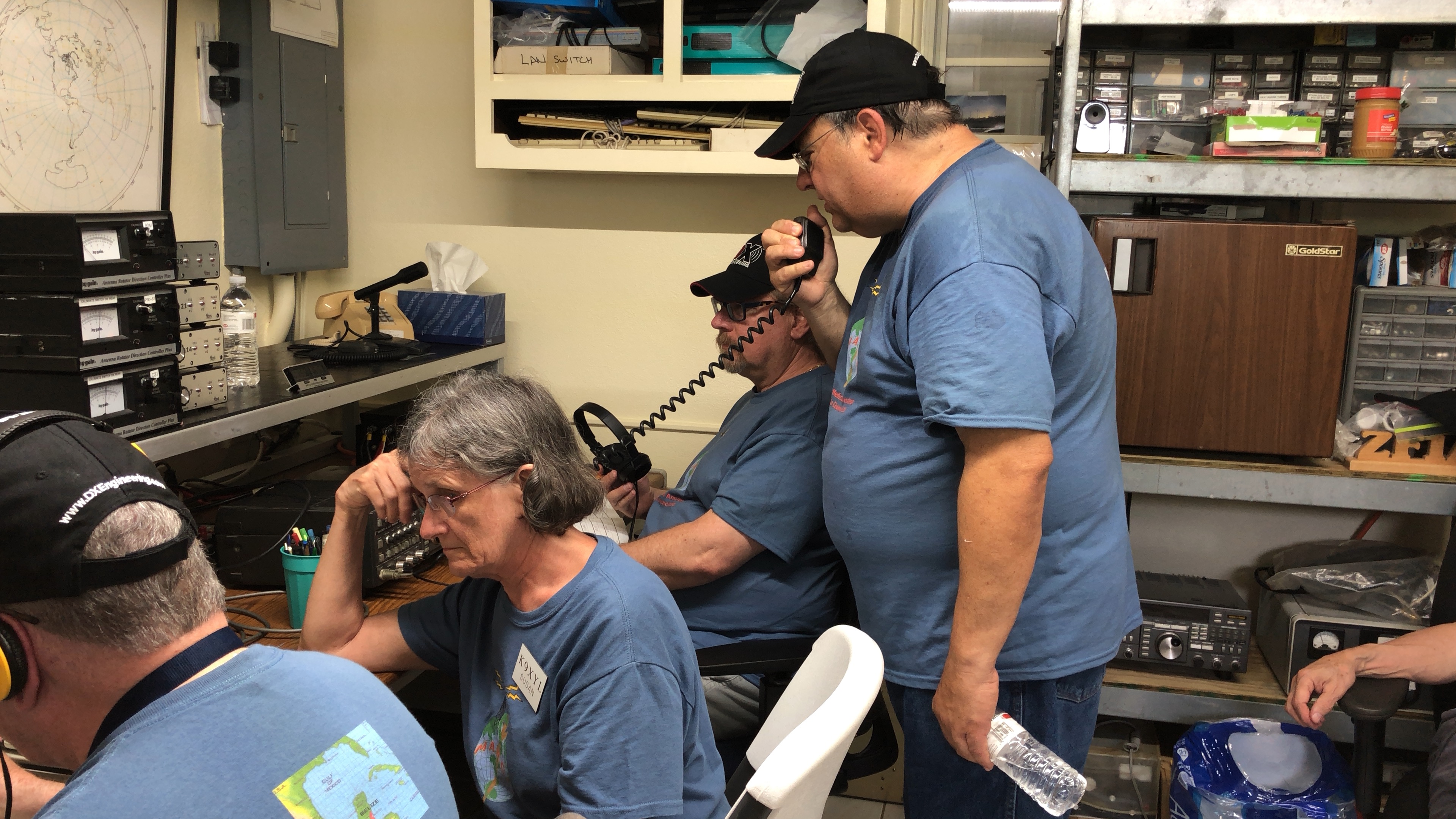 ZF2D was a much different operation. We had the use of the guest station of ZF1EJ, the Cayman Island Radio Club. We brought along our IC-7000 for 17m FT8 but had two of his radios for 20m CW and 20m SSB, Three stations were on the air at a time and each had its own tower and multiband antenna that one would salivate over! A log periodic at 100 feet and a Pro-67 at 70 feet were accompanied by a C3 somewhere in the 50 foot range, Station owner Eden ZF1EJ operates from 630 KHz to 6m and has an impressive antenna farm well beyond the antennas we used. Phil ZF1PB and John ZF1DJ spent the day with us as well. In four hours of operation we made 315 Q’s in 24 countries. 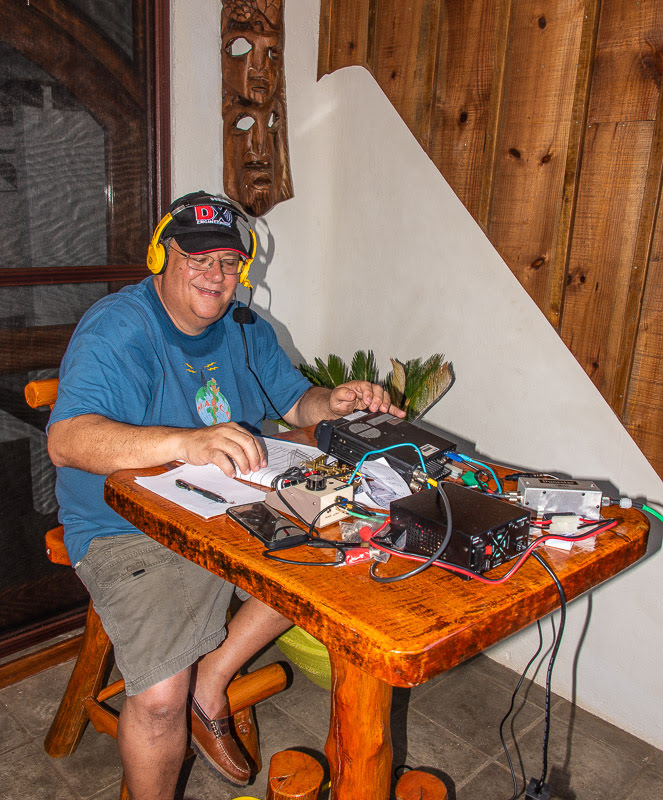 With the experience of planning these expeditions one fact is abundantly clear, it is much better to fly to a Caribbean Dx location and rent a super station. HQ9X is available on Roatan and sleeps ten (was not available for our visit). ZF1EJ allows visitors to use his guest shack, J6 has a great rental that sleeps six and has a fully equipped station, a location I am headed to for CQWW phone this year. With these plus more DX turn-key rentals available, there are opportunities for us OMs, OBs and YLs to take BRARA DX trips. 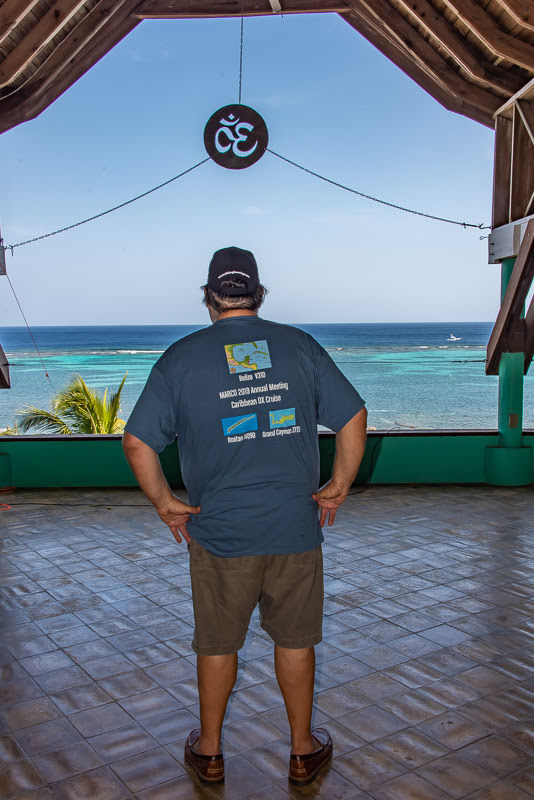