He is survived by his daughter, Kara O’Brien and husband Justin of Las Vegas, NV; grandsons, Jackson O’Brien of Las Vegas, NV, and Kaeleb Trayner of Poplarville, MS; and his siblings, Breta Gillis of Troy, Mark Kearns of Apex, and Tab Kearns of Cary. He is preceded in death by his wife, Jane McIntyre Kearns; his son, Maxton Kearns III; his daughter, Erin Trayner; and his sister, Linda Williamson.

A graveside service, with Coast Guard Honors was held Sunday, September 27, 2020 at Southside Cemetery in Troy, officiated by Tony Sedberry.

He was a great friend to all of us and a class act. Many of the assets in our radio community came from Max’s efforts. 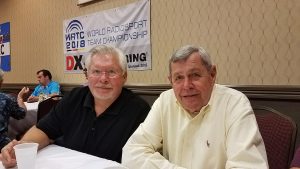 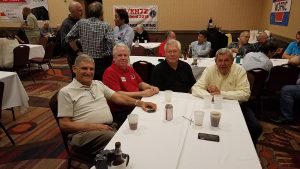 The picture has Art Lewis WA8VSJ , Tim Duffy K3LR, Greg Vantell W8ZKT and Max N4CGC. This group met every Dayton Hamvention weekend at the K3LR big DX party in downtown Dayton. Greg and Max are in the left picture. They became great friends.